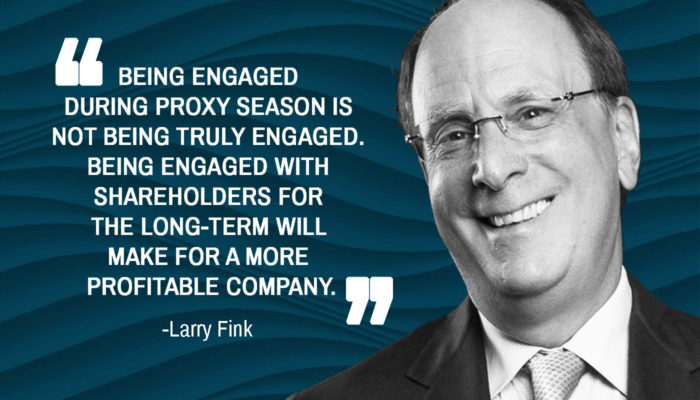 Just a week after BlackRock CEO Larry Fink sent a letter to the chief executives of the world’s largest public companies, calling for them to help improve society or risk losing support from BlackRock, the world’s largest money manager has just updated its voting guidelines for the United States – a leading indicator of potential changes to the Canadian guidelines.

BlackRock Inc. said it wants its portfolio companies’ boards to renew their membership to ensure relevant skills and experience. Furthermore, it stated they expect to see at least two women on every board. While BlackRock has urged companies in the past to add more women to their boards, it is the first time BlackRock is stating publicly that companies in which it invests should have at least two female directors.

Among the other changes, BlackRock also tackled many hot topics in governance circles. Their director overboarding new policy stated that a director who is the CEO of a public company may serve on a total of two public boards before being considered overboarded (while for other directors the number is four). BlackRock also added a policy regarding shareholders’ access to the proxy, stating that shareholders should have the right to elect, remove and nominate directors, approve the appointment of the auditor and to amend the corporate charter or by-laws.

While calls by big-name investors for societal changes are not anything new, when they come from BlackRock, with $6.5 trillion in assets under management, companies behave. We’ll obviously keep you posted!